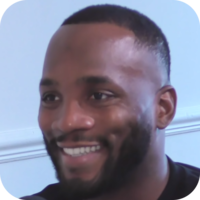 Leon Edwards delivered a knockout blow that was heard around the world when he dethroned the champion Kamaru Usman and became the UFC welterweight Champion at UFC 278 in Salt Lake City.

An incredible head kick was what it took for the UK to get its second-ever UFC Champion.

This website is created and maintained by the Inspirational People non-profit organisation. Image attribution: The above image has been cropped from image Anything Goes With James English, CC BY 3.0 via Wikimedia Commons.

Rocky's Road to Redemption, a documentary

Arnold Allen is one the best UFC fighters on the planet. On the MMA Hour with Ariel Helwani, Ariel asks Arnold if he is the best British MMA fighter in the world. Arnold replied "Leon Edwards is the best...having sparred with him, he's the best. That man's a different level."

Dan Hardy on is asked about the UK's Best Fighter

On the MMA Hour, Ariel Helwani asks expert martial artist and commentator Dan Hardy, "Who is the best UK fighter?" We've set the video to start where Ariel poses the question.

The full video covers Khamzat Chimaev & Darren Till, Tom Aspinall, Dan Hardy, Paige VanZant, and others. It was recorded on March 23, 2022. If you wish to watch the full MMA Hour show, please click rewind.

Leon has been fighting every single day of his life!

Official BT Sport promo as Leon Edwards returns to the Octagon for the first time since 2019. He fights Belal Muhammad in a bid to secure the title shot that has evaded him for so long. Premiered Mar 10, 2021

Leon Breaks Down Elbow Technique and Other Signature Moves

Leon breaks down his elbow striking technique as well as some of his other signature moves with the UFC. Mar 25, 2020